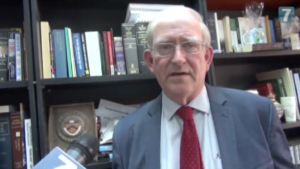 “He also has to deal with reality as he finds it,” Zell said, explaining why the embassy has not yet been moved. “The reality in the Middle East is that the Iranian threat, both on the nuclear level and on the geopolitical level, is so serious and so dangerous that it requires a coalition of the willing, of Israel and the Sunni Muslim states to resist the Iranian attempts to achieve hegemony over the region.”

“In order for that to happen, in order for that coalition to form and to be effective, we’ve got to give an opportunity for Israel and the Sunni states to get together. For that to happen we don’t need to move – this is what the president has decided, and this is what Prime Minister Netanyahu has decided – we don’t need to move the embassy right now.

“As soon as that coalition is built, I am confident that the President of the United States will carry through on his promise to move the embassy to Jerusalem, close the consulate general, and finally bring justice and peace to the city of Jerusalem.”