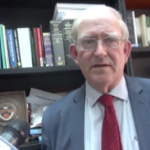 “He also has to deal with reality as he finds it,” Zell said, explaining why the embassy has not yet been moved. Continue Reading »