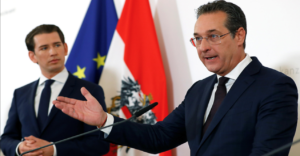 The video, prompting the resignation and the subsequent dissolvement of Austria’s coalition government, allegedly shows Strache offering a Russian woman government contracts in exchange for financial benefit for his party.

Rudolf Adam, former diplomat and dep. director of Germany’s secret service, published an article in the German monthly Cicero claiming: “Israel has an interest in promoting policies friendly to it and the growth of a radically right party poses a threat to European Jewish communities,” he said.

“It is unlikely that a European country is behind this campaign,” Rudolf wrote. “American intelligence agencies are occupied with Korea, Iran and China. The policies of President Donald Trump actually, support the right-wing stance of the former Austrian vice chancellor. The Russians had a good relationship with Strache. Regarding China and the Arab states, they have no reason to get involved in Austrian politics.”

After eliminating all other options, Rudolf concludes that only “one country has the manpower and technological capability to carry out such a campaign, as well as a clear motive — Israel.

The Conference of European Rabbis (CER) made up of 700 rabbis of Jewish communities, view these claims with concern. President of CER, Moscow chief rabbi, Pinchas Goldschmidt, said the attempt to blame Israel for the political downfall of a right-wing politician is reminiscent of classic anti-Semitism, and cannot be ignored.

The embarrassing photographs were published in two major German newspapers and show Mr. Strache conversing with a woman who introduced herself as the niece of a Russian oligarch, and allegedly discussed a corrupt deal. It is unclear who initiated the meeting and who covertly filmed it.

A screenshot from the recording of Strach and the “Russian”

According to the reports, the meeting was held in a private villa in Ibiza. The two sat side by side on a couch smoking and drinking.

On the tape the woman was heard offering to purchase 50% of the Austrian newspaper Kronen Zeitung and tilt its coverage in favor of Strache’s Freedom Party.

In exchange, Strache would send government contracts the woman’s way. He noted he wanted the kind of coverage Hungarian Prime Minister Viktor Orban is enjoying.

He also named some journalists he would like to see pushed out of the paper and five others he said “are new employees who we will promote”.

Strache explained that all funds for the party will have to be funneled through a foundation to keep the flow of money secret.

In a press conference given upon his resignation, Strache said he fell victim to an illegal political assassination but conceded his conduct in the recorded meeting was stupid and wrong.