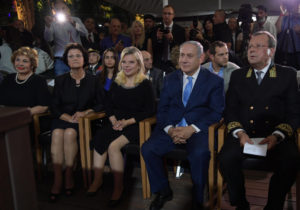 “I am delighted to be here,” Prime Minister Benjamin Netanyahu — who in the past has sent other ministers to the Russian Day celebrations — said in the picturesque Sergei Courtyard in Jerusalem.

Netanyahu said that he has “great respect for Russia for its contributions to civilization and for the courage of its people.” The prime minister noted the critical role the Red Army played in the defeat of Nazi Germany, saying “we never forget the sacrifice of the Russian people and the Red Army in the defeat of the Nazi monster “

Netanyahu said that the relationship between Israel and Russia is “born of common history and common interests,” including being “united in a common fight against terrorism.”

Russia’s newly appointed ambassador Anatoly Viktorov said that holding the reception in the Sergei Courtyard was in line with Russia’s statement last year “that we view west Jerusalem as the capital of Israel” provided that the “specific parameters of a solution” will be  reached through direct negotiations based on relevant UN resolutions.

Sergei Courtyard was transferred to the Russians following a 2007 cabinet decision. The Czarist-era landmark was constructed in 1890 to accommodate Russian pilgrims visiting the Holy Land, and was named after Czar Alexander II’s son, Sergei Alexandrovich. The property has been renovated, and was reopened last year housing a hostel for Christian Orthodox pilgrims, a museum and a library.