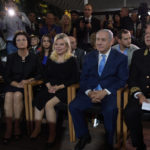 “I am delighted to be here,” Prime Minister Benjamin Netanyahu — who in the past has sent other ministers to the Russian Day celebrations — said in the picturesque Sergei Courtyard in Jerusalem. Continue Reading »