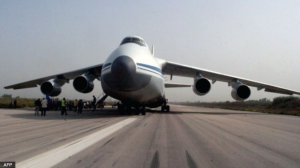 “We have been informed that the Russians are entering into active intervention,” Amos Gilad, senior adviser to Israeli Defense Minister Moshe Yaalon, said at a recent security conference.

Ram Ben-Barak, director-general of Israel’s Intelligence Ministry, told Reuters that this development “could [have] ramifications for us, certainly.”

The first, and most obvious, concern is that periodic Israeli strikes on Syrian targets could inadvertently result in Russian casualties, bringing Jerusalem and Moscow into direct conflict.

Released by the official Syrian news agency, Sana, shows one of the Russian planes in Latakia – AFP

An additional reason for worry is that this development further highlights the waning influence and power of America in the Middle East.

At the same time, ISIS and the other jihadist forces currently tearing the region apart need to be stopped, and many living here feel America and other Western powers are doing far too little to make that happen.