Unconfirmed report by Russian Arab-language newspaper claims: ‘armed Syrian militants will use territories controlled by the Syrian regime to perpetrate their provocative plan’ 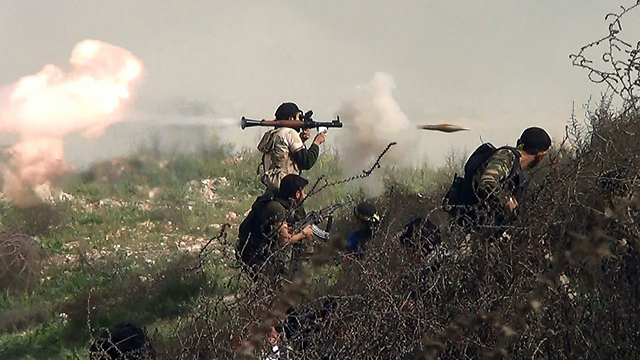 In the report, it was claimed that “armed Syrian militants will use territories controlled by the Syrian regime to perpetrate their provocative plan.”

The story was quick to spread through pro-Assad outlets, like the Hezbollah affiliated Lebanese stations Al Manar and Al Mayadeen. The Russian site is also known for its pro-Assad bias in covering the Syrian crises, what suggests that there is a possibility the story might propaganda.

In the past, the Syrian regime and its mouth-pieces have claimed that the rebels are responsible for the chemical weapons usage – a claim that has now become part of their line of defense against the West. A few days after the chemical attack in question, the official state Syrian TV published a report in which Syrian soldiers allegedly suffered chemical related symptoms after entering a rebel position, where they found chemical materials related to the attack.

Russian Foreign Minister Sergei Lavrov suggested Monday that Syria place its “chemical weapons under international control and then have them destroyed,” if such a move would help “avoid military strikes” that are being considered by the United States and its allies. Lavrov said he had already passed the proposal to al-Moallem in Moscow and hoped for a “quick and positive answer” from Syria

Syria welcomed the Russian proposal, as al-Moallem praised the Kremlin for seeking to “prevent American aggression”.

Al-Moallem who spoke to reporters through an interpreter after Russia expressed hope the proposal could avert military strikes against Syria, stopped short of saying explicitly that President Bashar Assad‘s government accepted it.

Israeli President Shimon Peres commented on the compromise, saying: “The Syrians have promised that they are not trustworthy and their integrity cannot be counted on,” Peres said at an event, adding that the Russian inititative requires negotiation.

A senior Israeli official commented on the international bid to remove chemical weapons from Syria, saying “this is the best solution also for Israel. Everyone is now playing their own game, but everyone’s interest, including Israel’s, is to destroy Assad’s chemical stockpiles without going to war.”

General Salim Idris, head of the Free Syrian Army, dismissively responded to the Russian initiative, saying; “The (Syrian) regime has a massive arsenal, the size and location of which is unknown.” According to him, Syrian Foreign Minister Walid al-Moallem welcomed the initiative only in a bid to postpone the American strike.

The Associated Press, Reuters and AFP contributed to this report.