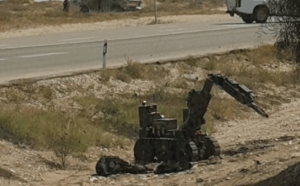 The incident is being investigated. There were no reports of injuries. The IDF instructed Gaza vicinity residents to return to their routine schedule.

A police spokesperson said the report on the terrorists’ arrest was received in the midst of the search. “The three suspects were handed over to the Israel Police and a police sapper is working to neutralize and dispose of the weapons. The Israel Police are continuing their extensive activity and the public is requested to report any suspicious incident to the 100 emergency telephone number.”

Earlier, IDF forces conducted an extensive search in the border fence area in the southern Gaza Strip after detecting footprints near the fence during a routine activity. Security personnel at the nearby communities were placed on a heightened state of alert.

The incident raises some serious questions, in light of the fact that the IDF boosted its forces around the Gaza Strip this week in light of the mass protests expected in the area on Friday. The IDF was prepared for a Palestinian attempt to break through the fence or enter Israel on the eve of the Passover holiday. The Palestinians have now proved that infiltrating Israel is possible despite the advanced technological means deployed around the strip.

Eshkol Regional Council head Gadi Yarkoni told Ynet, “The IDF must investigate this incident to prevent such things from repeating themselves. Such an incident could have ended differently. There are many unknown factors here. On the one hand, they infiltrated with ammunition, and on the other hand, there was no resistance. With all the means at our disposal, we cannot afford to have armed people walking around 20 kilometers from the fence.”

Knesset Member Haim Jelin (Yesh Atid) said, “This is a serious mishap. Too many events have been happening in the past week, and the feeling is that the IDF is focusing on the larger things, the tunnels and the ‘march of the million,’ and isn’t paying attention to the smaller things.”

Jelin, who lives in the Gaza vicinity, added: “They infiltrated deep into the territory. It’s not one or two kilometers, it’s several hours of escaping. They didn’t run.”

Such an incident, he said, “negatively affects the residents’ strength, because the resident asks himself where is the IDF which should be protecting him. It’s true that the terrorists were eventually caught, but I’m telling you this isn’t good. It leaves a very bad feeling and I hope conclusions will be drawn.”

Ynet’s commentator on security affairs, Ron Ben-Yishai, said the infiltration stems from a mentality that once the Gaza obstacle is built with a wall above and under the ground, all problems will be solved.

“The security method must be examined from now until the southern obstacle is fully built,” he said.

On Saturday, four Palestinians entered Israel from the Gaza Strip near Kibbutz Kissufim and attempted to torch heavy engineering equipment used for the construction of the underground anti-tunnel barrier. An IDF force approached them and the four fled back to the Gaza Strip.

There were no casualties and only minor damage was caused to the heavy equipment. Israel Air Force fighter jets attacked a target at a Hamas training camp in Rafah in the southern Gaza Strip overnight Saturday in response to the incident.

A preliminary investigation revealed that the four arrived at an engineering complex near the border, were large IDF heavy equipment used to build the new subterranean Gaza barrier are kept. They then tried to set the tools on fire with gasoline tanks they brought with them, fleeing when they saw an IDF patrol team headed their way.

Police Commissioner Roni Alsheikh said Tuesday morning, “There are no changes regarding the warnings. There is no increase in plans to carry out terror attacks. We are dealing with this routinely, all year round. The overwhelming majority of terror attacks aren’t implemented after being thwarted by the IDF and Shin Bet together with us. The system can’t be completely hermetic. The picture isn’t any different on the eve of the (Passover) holiday. At the moment, we aren’t seeing a worse security situation as we approach the holidays.”

IDF Chief of Staff Gadi Eisenkot cautioned Monday that “the Palestinian arena is highly explosive, which requires us to remain constantly vigilant.”

Tensions have been on the rise on the Gaza border after Hamas held a large-scale military exercise on Sunday and machinegun fire from the strip triggered the Iron Dome missile defense system.

In addition, Hamas is planning a mass march of Palestinians in Gaza towards the border with Israel and protests starting this Friday, Land Day, and ending on May 15, Nakba Day.

“Each and every generation of the country’s protectors had to continue fulfilling the mission of its predecessor—for the present generation and the future generation, which will follow in its path,” the IDF chief continued in a speech at a ceremony recognizing excelling officers and non-commissioned officers (NCO).

“Seventy years have passed and the IDF has turned from a young army taking shape in the storm of battles to an army that is ready, fit and powerful,” Eisenkot added.

“Even at this time, we are facing many challenges. And when facing the threats developing in the changing strategic environment, we are required to act with determination and might,” he concluded.

Attila Somfalvi contributed to this report.