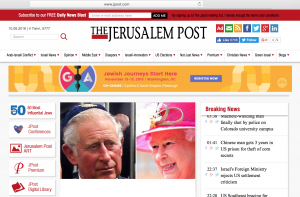 After years without reliable verification, a Saudi Arabian journalist confirmed on Monday that Saudis can now access The Jerusalem Post online from inside the Kingdom.

A reader in Saudi Arabia also wrote on Twitter on Monday that he can now access the site from there on his mobile device.

It is unclear when the Kingdom stopped censoring JPost.com, but it apparently blocked access to the site beginning in May 2013. The Post features extensive coverage of Saudi Arabia and its role in the Middle East peace process.

“Traffic in the Kingdom actually went back up in summer of 2014,” Ilan Yogev, the Post’s content collaboration manager said on Wednesday, adding he has not seen any change to suggest that something is different in recent months.

Ahmed Abdel-Raheem is an Egyptian artist and PhD student and lecturer at Al-Lith College for Girls at Saudi Arabia’s Um Al-Qura University.

In 2013, he wrote on the conservative British website The Commentator, “Over the past week I have tried to access the website of the newspaper The Jerusalem Post, but every time I click the link of the paper, I have received the message: ‘Sorry, the requested page is unavailable.’” At the time, Jpost.com’s managing editor said, “Since the start of May, there has been an almost 100% drop in the number of visits to Jpost.com from Saudi Arabia. Up until April 30, we were getting hundreds of visits from Saudi Arabia every day, and now it is less than 10. There is clearly a demand for news from The Jerusalem Post, and it is a shame that the Saudi regime is proving yet again that it is determined to stifle freedom of thought and expression among its own population.”

While it excluded the Post in 2013, the Kingdom at that time allowed other major Israeli news organizations to operate.

All major Israeli news websites are now accessible in the Kingdom, according to recent reports.