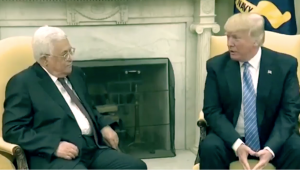 While state visits to the Palestinian Authority leadership in Ramallah have become an established feature of visits to Israel by senior Western leaders, PA officials apparently had something bigger and less innocuous planned than the typical meet-and-greet.

According to Israel Hayom, President Trump was initially slated to walk through the grounds outside the PA’s Muqata government complex to an official reception ceremony with Palestinian Authority chairman Mahmoud Abbas.

The proposed route would take the president right next to the burial place of former PLO leader and arch-terrorist, Yassir Arafat; a detail left out by the PA planners who presented the route to American officials.

Rather than a minor logistic oversight, the move was part of a calculated effort to lay a PR ambush for the president, allowing photographers to catch him in what would appear to be a planned visit to the grave of the deceased terrorist leader.

A senior PA official and aide to Mahmoud Abbas admitted to Israel Hayom that the proposed route’s proximity to Arafat’s grave was no accident.

But perceptive White House aides quickly realized the gravity of the president passing through the planned route, and nixed the plan, the PA official said.

“A short time after the Secret Service and the president’s security team approved the route…officials from President Trump’s office contacted us to tell us that President Trump and his family would not be able to pass next to Arafat’s grave, since doing so could potentially create an embarrassing situation for the president inside the US, and even a diplomatic crisis with Israel, and we were asked to find alternative routes.”