The 18-month-old child of the Hebron massacre was spared only because he was covered by the corpses of his parents.

In 1929, after years of relatively peaceful existence, the Arabs of Hebron responded to the call of the Mufti of Jerusalem and slaughtered the Jews in their midst. 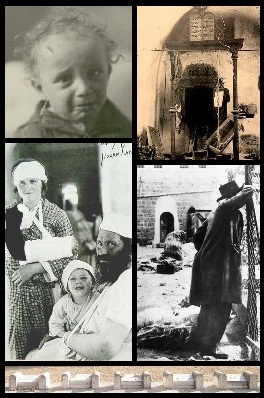 From top-left, clockwise: Shlomo, son of Eliezer Dan Slonim, aged 1, survives with wounds to his finger and forehead; The Holy Ark of the Sephardi Synagogue of Abraham is ransacked; A survivor reflecting in the aftermath of the slaughter; Family Kolstein recover from their injuries.
Bottom: Memorials to murdered rabbinical students in the old Jewish cemetery. – Photo courtesy: Wikipedia

A Jewish child, Shlomo Slonim, 18-months-old at the time of the massacre, survived the brutality.
The Slonim baby lived because after being struck in the head with an axe, he lost consciousness and was covered by the dead bodies of his slain parents. His four-year old brother and grandparents were also slaughtered.

In all, 24 of the 67 Jews butchered in Hebron that day died in the Slonim household. People hid there because it was thought to be the safest place, given the close relations Shlomo’s father had with the Arab neighbors who had promised him protection.

But none were spared.

Hebron had been the oldest Jewish community in the world, dating back to the time of patriarchs.

Every year Slonim attended the memorial for those slain in 1929 in Hebron.

The funeral for Shlomo Slonim who died at age 86, today, Oct. 27, will be tomorrow at 2:30 PM in Ra’anana, at the Kfar Nachman cemetery.

Another ‘survivor’ of the Massacre: