The son of former Hezbollah commander Imad Mughniyeh along with five other terrorists were killed in an alleged Israeli air strike in Syria on Sunday, Hezbollah-linked media reported.

Jihad Mughneye speaking in front of Imad Mughneye’s picture, his father that was allegedly assassinated by Israel – Photo: ARAB MEDIA

Sources linked to the Islamist organization said that Jihad Mughniyeh, who oversaw the Syrian Golan Heights division of the group, was killed in the attack.

“Hezbollah’s leadership will decide how to respond to this new Israeli aggression, but this strike is unthinkable,” a statement from the group read, according to the Al-Akhbar news site.

The Israeli military has neither confirmed nor denied the reports, in keeping with its usual policy in such cases. 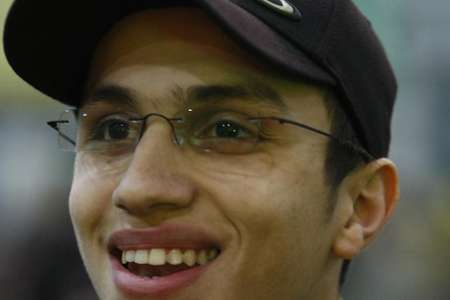 An Israeli security source told AFP the strike was targeting terrorists who were allegedly preparing an attack on Israel.

The source said the strike took place near Quneitra, close to the ceasefire line separating the Syrian part of the Golan Heights from the Israeli sector, confirming a report by Lebanon’s Al-Manar television.

In December, reports surfaced that the IAF allegedly bombed several targets on Syrian territory, including some in the vicinity of the Damascus international airport.

Although Israel refused to confirm or deny the strikes, it said it would not allow “sophisticated weapons” to fall into the hands of its enemies.