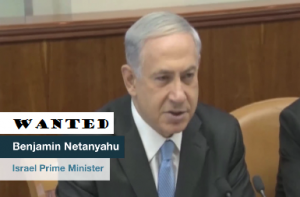 Judge Jose de la Mata ordered police and national guard forces to notify him immediately if Netanyahu or several other named Israeli officials entered the country. The ruling surrounds the case of the 2010 Mavi Marmara raid, in which IDF forces were attacked by Islamist extremists as they intercepted a flotilla of ships attempting to breach the IDF’s blockade of Hamas-ruled Gaza.

In the resulting clashes nine Islamists were killed, while a tenth died of his wounds several months later.

The Mavi Marmara took part in a flotilla by activists who claimed they were carrying “humanitarian aid” for Gaza. But the ship defied orders to turn around and dock at the Ashdod port, where it would be allowed to transport any such aid to Gaza. After the raid, it was discovered that the ship did not in fact contain any aid, and had been deployed purely to attack IDF forces.

The International Criminal Court has repeatedly rejected calls to probe the raid.

Israel’s blockade of Gaza has been ruled legal by the UN, and is meant to prevent sophisticated weaponry and rocket-making equipment from entering into the Islamist-controlled enclave.