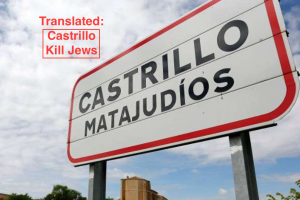 Historical records indicate that Jews’ Hill Camp was actually the town’s original name, which was changed to Camp Kill Jews in 1627, 135 years after Jews were ordered to convert to Catholicism or flee the country in the 1492 Spanish Inquisition.

Although Jews were killed in the area, researchers believe the town received its current name from Jewish residents who converted to Catholicism and wanted to convince Spaniards that they opposed Jews. Others think it might have simply come from a slip of the pen.

“It must be remembered that the expulsion from Spain was for Jews a traumatic event of historic dimensions and set out the trajectory for the Jewish people from there on,” Kutner said at the ceremony.

There are no Jews living in the town today, but many residents have Jewish roots.