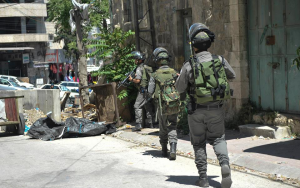 According to the Ma’an News Agency, 17-year-old Qusay Hasna al-Umour was shot in the chest three times during clashes in the village of Tuqu.

Ma’an also reported that four other Palestinians were shot during the clashes.

The Palestinian Red Crescent claimed that al-Umour was detained for an unspecified amount of time after he was shot before he was handed over to the Palestinian paramedics for treatment.