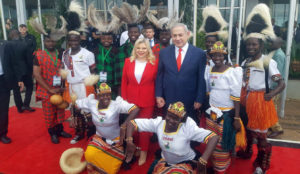 Netanyahu was on an official visit to Uganda where he met with President Yoweri Museveni.

Sudan, a Moslem country of 43 million people, does not have diplomatic relations with Israel.

Prime Minister Benjamin Netanyahu arrived in Uganda on Monday, saying his country is “returning to Africa in a big way,” and promising “very good news for the State of Israel.” 

Before his departure on Monday morning, Netanyahu spoke of “very important diplomatic, economic and security ties that will yet be told about.”

“I am going on my fifth visit to Africa in three and a half years,” Netanyahu said as he prepared to leave for the East African nation.

“These are very important ties on the diplomatic, economic and defense fronts.”

Benjamin Netanyahum, accompanied by his wife Sara, visits the grave of his brother Yoni at Mount Herzl in Jerusalem – Photo: Israel’s GPO

The prime minister was welcomed by Uganda’s prime minister at the international airport in Entebbe, where Netanyahu’s brother Yoni was fatally struck by a bullet as he led IDF commandos in a daring mission to rescue hijacked passengers in 1976.

Israel’s success in the covert raid humiliated then-Ugandan President Idi Amin.
Israel has long courted African support. In exchange for its expertise in security and other fields, Israel wants African states to side with it at the UN General Assembly, which overwhelmingly recognized Palestine as a non-member observer state in 2012.

Reports in Israel in recent years have suggested it might normalize diplomatic relations with several Muslim countries in Africa.

Israel renewed diplomatic ties with Guinea in 2016. After Netanyahu visited Chad for a renewal of ties in 2019, it was reported that Israel was working to formalize ties with Sudan.

During Netanyahu’s trip to Uganda in 2016, Museveni urged both parties to live “side by side in two states … in peace and with recognized borders.”