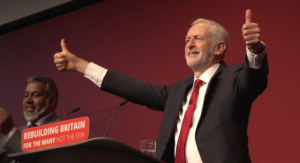 Jeremy Corbyn seen here leading a pro-Gaza/Hamas demonstration in the summer of 2014 also later attended a ceremony at the grave of a terrorist behind the Munich Olympics massacre.- Photo: Social Media screenshot

Falter presented the data Tuesday at a European Jewish ‎Association conference in Brussels, during a session ‎on the challenges facing British Jews. ‎

The British police on Friday launched an official ‎investigation into alleged anti-Semitic hate crimes ‎in Labour, whose leader, Jeremy Corbyn, has faced ‎growing criticism about his tolerance of racism and ‎anti-Semitism in the party. ‎

This includes, among other things, ensuring freedom ‎of religion and worship across Europe, fully ‎adopting the International Holocaust Remembrance ‎Alliance’s definition of anti-Semitism, a commitment ‎to exclude anti-Semitic parties from coalitions, and ‎calling on all political parties to designate the ‎boycott, divestment and sanctions movement as anti-‎Semitic.