Survey: European Jews Afraid to be Recognized as Jewish 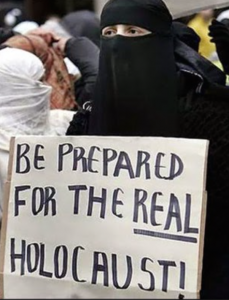 Record breaking number of anti-Semitic inspired acts of violence has manifested into overt fright with over 85% of European Jewry not attending Rosh Hashana services this year, for fear of possible anti-Semitic repercussions.

An alarming majority of Jews living in Europe today are afraid to reveal their Jewishness, a survey carried out by the Rabbinical Centre of Europe(RCE) published on Tuesday found.

The data indicates a severe erosion in the sense of security felt by European Jews. The survey found that over 85% of Jews in Europe do not bring their children to synagogue on Rosh Hashana to hear the shofar, out of fear of anti-Semitism.

According to Rabbi Menachem Margolin, head of the European Jewish Association, “rabbis and community leaders from all over Europe report that more and more Jews refrain form publicly identifying with Jewish.

This presents an existential threat to European Jewry, Margolin noted.

“Most young people whose parents avoid identifying as Jews do not retaina connection to the Jewish people and their homeland,” he explained. “This trend threatens the Jews of Europe and could later become a strategic problem for Israel.”

“We are dealing now with a pincer movement,” Margolin asserted. “On the one hand, we see repeated waves of anti-Israel harassment, which is really anti-Semitic expression.”

“On the other hand, especially in light of what has already been seen in many Islamicized cities throughout the continent, we are faced with a murky wave of nationalism and xenophobia.”