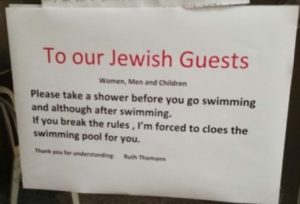 Many haredi tourists visit European resorts at this time of year, when yeshiva students are on summer vacation.

One couple who arrived at the Swiss vacation spot saw the sign and said there were no other signs referring to any other religious sector.

Some Jewish guests reported another sign specifically addressing “Jewisch Guests” posted in the kitchen area of the holiday apartments, asking them to take food out of the refrigerators only at designated times.

The guest who reported the signs to Israel Hayom said, “We were horrified by the sign. The sense is that Jews, and especially not Jews of a religious appearance, have no reason to be in Europe. We feel the hate.”

A Jewish couple said the sign made them extremely uncomfortable.

“It ruined the feeling of a vacation. We felt very unwanted. The place might be called ‘Paradise,’ but for Jews it isn’t at all. It really reeks of anti-Semitism,” a guest said.

In a phone conversation with Israel Hayom, a representative of the Aparthaus Paradies apologized for the offensive signs and promised to remove them.

“There was no intention to offend anyone. We are very far from anything having to do with anti-Semitism. Most of our guests are religious Jews, and we respect them and are happy to host them,” the representative said.

“The sign over the refrigerator was addressed to Jews, because they use the employees’ refrigerator to store kosher food. The pool sign requested that hygiene rules be observed because of things that happened in the past. We apologize if anyone was offended.”