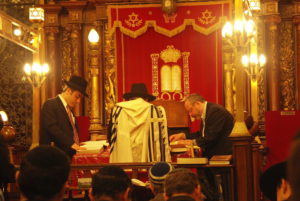 The Land and Environment Court ruled on Wednesday against an appeal by Chabad group, Friends of Refugees of Eastern Europe, against Waverley Council’s refusal of plans to demolish tennis courts to construct a new synagogue due to security concerns.

The council maintained that the site “is unsuitable for a synagogue because of the potential risk to users and other members of the general public.”

It also gave other reasons that: “the proposal does not respond to the context and character and streetscape of the area or provide a sufficient residential identity,” as well as “unacceptable amenity impacts such as inadequate solar access, noise and loss of privacy.”

“The decision is unprecedented,” Rabbi Yehoram Ulman, director of the Bondi Beach Friends of Refugees of Eastern Europe said in a statement. “Its implications are enormous. It basically implies that no Jewish organization should be allowed to exist in residential areas. It stands to stifle Jewish existence and activity in Sydney and indeed, by creating a precedent, the whole of Australia, and by extension rewarding terrorism.”

“By pulling the terror threat argument they [the council] have shown that they are completely out of touch both with the reality and with needs of their constituency. They have effectively placed in jeopardy the future of Jewish life in Australia,” he added.

“The proposed development should be refused as the site is not suitable for the proposed synagogue use as the Preliminary Threat and Risk Analysis relied on by the Applicant raises concerns as to the safety and security of future users of the Synagogue, nearby residents, motorists and pedestrians in Wellington Street and the physical measures proposed to deal with the identified threats will have an unacceptable impact on the streetscape and adjoining properties,” the council argued.

NSW Jewish Board of Deputies chief executive Vic Alhadeff told news.com.au he had never heard of any other religious group being denied a place of worship just because they were targeted by outside extremists and that the move was a dangerous precedent.

“It’s a very sad day for Australia if an established community, which needs a house of worship, is refused permission to build it because of fear that others may pose a threat,” he said.

A Waverley Council spokesperson told the news outlet that the court had supported the council’s position, which was supported by several residents’ concerns, an argument disputed by Ulman, who said: “they have sacrificed the needs of a large local community, and claimed the exact opposite, that the community opposes the proposal.”