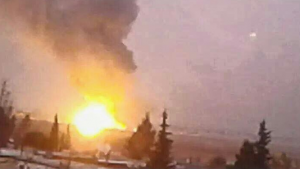 The Observatory reported “loss of life” without giving further details.

“The missiles, probably Israeli” were fired into the southern region, including the Tall al-Hara area in Daraa province, the Britain-based Syrian Observatory for Human Rights said.

Syrian state television also referred to reports of “Israeli aggression” in the region.

Israel has admitted to conducting “hundreds of strikes” on Iranian-linked targets on Syrian territory, with the aim to contain Iranian military entrenchment in its northern neighbor.

The British-based Syrian Observatory for Human Rights released a report in April that said Israeli airstrikes on Syrian territory have killed 232 people since April 2018.

The Syrian conflict has killed more than 370,000 people and drawn in world powers since it started in 2011 with the brutal repression of anti-government protests.