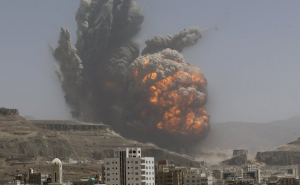 Syrian state media on Friday reported that overnight the Israeli Air Force (IAF) conducted an airstrike on a regime army base just outside of Damascus, apparently striking a shipment of Scud missiles.

The Syrian sources, including those identified with Bashar al-Assad’s regime, said the target on Thursday night was a convoy from the base of the Syrian Army Brigade 155 in Al-Katifa, a northern suburb of Damascus, according to Channel 2.

A convoy of four trucks loaded with ballistic missiles was hit in the strike, and according to the report, the base houses long-range Scud missiles that are shipped from there to northern Syria as part of the civil war.

IAF jets struck after midnight when the truck convoy set out from the base as it passed through the mountains adjacent to Al-Katifa, heading for an unknown destination. It would seem likely the trucks may have been a Scud shipment to the Iran terror proxy Hezbollah in Lebanon, which is fighting for Assad.

A fuel reserve was also struck, causing massive explosions and flames according to the reports. Witnesses reported seeing massive pillars of smoke rising from the site after hearing a string of explosions.

According to the Syrian regime media, the jets were unmanned and steered remotely, and arrived from Lebanese airspace.

The strike would seem to indicate that even after Russian began its massive military involvement in Syria and deployed its advanced S-400 air defense system in the country, Israel continues to act freely and apparently in coordination with Moscow.

Prime Minister Binyamin Netanyahu just this Tuesday confirmed that Israel occasionally conducts airstrikes in Syria, in the most explicit acknowledgement yet of the strikes long reported in the Arab press.

Israel “is active from time to time in Syria,” Netanyahu said at the Eighth Galilee Conference held in Akko (Acre). He said the activities are intended “to prevent a military front against us, and also in order to prevent the transfer of lethal weapons from Syria to Lebanon.”

Just last week in the latest of numerous recent airstrike reports, it was reported by a Saudi news site that the IAF hit advanced Russian anti-tank missiles capable of piercing the armor of the Merkava Mark IV, Israel’s most advanced tank.

The missiles were stored just outside of Damascus adjacent to an elite unit of the Syrian army, and apparently were en route to Hezbollah in Lebanon.

Concerns over missile shipments to Hezbollah are well-founded, as shown by an updated Israeli assessment released earlier last month which revealed Hezbollah has no fewer than 150,000 missiles pointing at Israel.