Syrian rebel leader: ‘Israel, is not our enemy, Iran is.’ 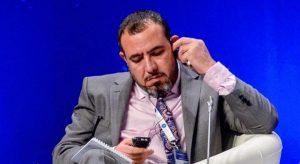 Salim Hudaifah, a former Druze intelligence officer in the Syrian army says, ‘Israel can help us. The treatment of the wounded has improved its image, but it is limited because the Arab media does not report it.’
– Assad and ISIS, he is sure, are cooperating behind the scenes.

“We have intelligence information that Assad is behind ISIS and Jabhat al-Nusra in Syria. Assad deceives everyone on this issue, including the Russians. He’s the one who gives them orders. Israel must be very concerned that our assessment is that once Assad is cornered and feels distressed, he will order ISIS to attack Israel. That will be his last-ditch effort, to try to drag Israel into this war, as a desperate measure.”

The Forum was held last week for the 15th year in Astana, capital of Kazakhstan, with 600 people from 60 countries in participation. It was headed by Dr. Dariga Nazarbayeva, chairman of the Senate Foreign Affairs Committee and daughter of the President of Kazakhstan Nursultan Nazarbayev.

The following was said in a panel on the subject “The Syrian crisis is the end in sight?” which was attended by Foreign Minister of Kazakhstan Kairat Abdrakhmanov, former Turkish President Abdullah Gul, Hudaifah as a representative of the Free Syrian Army, Alaa Ebrahim—a journalist affiliated with the Assad regime and ex-PM Chief of Staff and Chief Negotiator Gilead Sher from Israel.

Kazakhstan hosts the cease-fire talks in Syria under the auspices of Russia, Turkey, Iran, the United States and the United Nations. It will soon host the fifth meeting between the Assad regime and the rebels, which will discuss the implementation of buffer zones and the establishment of a monitoring system.

Hudaifa, a former Druze intelligence officer in the Syrian army who defected to the West, said in the forum that Assad and ISIS are like a man and his shadow.

“The moment you take out the man, his shadow will disappear,” said Hudaifa. “We have 57 battalions on the ground and no one has put the spotlight on us. They talk only about ISIS, which is supported by the Assad administration, and was even brought to Syria by him.”

“Every time we attacked ISIS, the Syrian army came to attack us from behind,” explained Hudaifa. “Assad was the one who freed many of the commanders of ISIS and Jabhat al-Nusra from prison. The Assad regime is playing with the blood of the citizens of Syria, and to my great sorrow, so are the superpowers. No Syrian citizen will agree to accept Assad as the future leader of Syria. Assad must leave the country.”

We want peace with Israel

Kazakhstan’s Foreign Minister Abdrakhmanov said ahead of the fifth meeting in Astana that he was optimistic that the war could be brought to an end.

“We definitely see light at the end of the tunnel,” he said, adding that it was welcomed that the Trump administration had joined the talks in Astana on the end of the war in Syria, and that US Secretary of State Rex Tillerson had even sent his deputy to the last meeting.

“Kazakhstan as a Muslim country is considered a fair mediator and I think we can succeed where others have failed,” the foreign minister summarized.

Hudaifa, though, does not believe Kazakhstan’s talks will succeed.

In his opinion, this is a “fixed” game that is only intended to give Assad and the Russians time to continue fighting and achieve accomplishments on the ground.

The opposition leader said that as an intelligence officer in Assad’s army, his main enemy was Israel. In 1990 he deserted the Syrian army and fled to the West. He found asylum in Denmark, where he met Israelis for the first time in his life and connected with them.

He was later head of the program for training the Free Syrian Army forces by the Pentagon. After a year of training in Jordan, the Americans decided to stop the program and went to cooperate with the Kurds.

Hudaifa noted that Israel conducts extensive intelligence activities in Syria, especially after ISIS, but does not transfer the information to the opposition. “We do not need the help of Israel, we have people on the ground, and we know very well what ISIS is doing. We want peace with Israel, and today, among the opposition in Syria, most people understand that the enemy is Iran and not Israel, so there is a good chance that there will be peace in the future.

“Israel needs to do more and help the rebels. People here are disappointed (with Israel). There are also quite a few who think that you are helping Assad, because they see that the Israeli-Syrian border is quiet.

“I think you can be more proactive and help us. Regarding the treatment of the wounded in your hospitals, it certainly improved Israel’s image in the eyes of Syrians, but only in a limited way. The reason is that the Arab media does not report it.”

A sharp confrontation broke out between Sher and Ibrahim during a debate in the forum.

Sher noted that since the outbreak of the Syrian war, Israel has treated some 3,000 Syrians who were wounded in the fighting and that it had refrained from intervening in the war.

He also called for a solution that would ensure the removal of Assad and the Iranians from Syria. Ebrahim accused Israel of blatant intervention in the war in Syria and said that the wounded Israelis dealt with were “terrorists” who were treated and returned to combat.

Both Hudaifa and a British journalist working in Syria named Shahida Tulaganova stood beside Sher, saying that most of the Syrian wounded who were treated in Israel were civilians, some of them women and children.