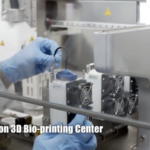 Researchers at Israel’s Institute of Technology, the Haifa based Technion, are developing complex & precise artificial cells, tissues and organs to aid treatment in all areas of regenerative medicine.

The Technion-Israel Institute of Technology recently launched a center for the printing of cells, tissues and organs, where 3D scaffolds and cells that grow into tissue are constructed to aid treatment in all areas of regenerative medicine.

Three-dimensional printing of tissue helps researchers develop complex and precise artificial tissues that improve their integration in target organs. This involves the creation of tissue containing a developed system of blood vessels that quickly connect to patients’ own blood vessels. Continue Reading »

CollPlant’s bio-ink enables the 3-D printing of tissue and organs, with the aim of providing a solution to the significant need of life saving organs.

The Israeli regenerative medicine company CollPlant has filed a US  to be used in the three-dimensional printing of tissues and organs.

CollPlant’s patent application refers to formulations of bio-ink based on the firm’s rhCollagen (recombinant type 1 human collage), a plant-based technology that mimics human collagen – the main structural protein in connective tissues. By filing the patent, the Ness Ziona-based company expressed hopes of establishing its position as a leader in three-dimensional biological printing and of forming partnerships in the field of organ printing. Continue Reading »

The problem of “printed weapons” surfaced about two months ago, when Cody Wilson, a 25-year-old student from Texas, designed the first functional hand-gun to be printed, nearly in full, by a 3d printer. Continue Reading »