The problem of “printed weapons” surfaced about two months ago, when Cody Wilson, a 25-year-old student from Texas, designed the first functional hand-gun to be printed, nearly in full, by a 3d printer.

An investigative report by the Tzinor Laila program with Guy Lehrer aired on Wednesday showed how easily a gun, on all its parts, can be printed and assembled.

The gun was then tested in a professional shooting range under the supervision of police Maj. Gen. (Ret.) Dan Ronen, and successfully fired a live bullet at a cardboard target.

The crew was ready to test how prepared security arrangements are for this new kind of threat. The first time, the plastic gun was snuck by the show’s reporters into the offices of the Knesset Interior Committee Chairwoman Miri Regev.

The second, reporter Uri Even managed to carry the gun into an event in the Knesset compound, attended by Prime Minister Benjamin Netanyahu.

The reporter passed all the security checks, including a metal detector, and got only a few feet away from the prime minister without being accosted. 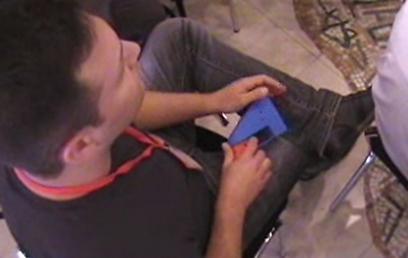 With the gun, in the Knesset – Photo: Channel 10

Knesset Officer Brig. Gen. Yossi Griff said in response that this is a new phenomenon which poses a completely new challenge for security arrangements in Israel and the world.

The Knesset, said Griff, like all government ministries and public institutions, is currently examining the issue in attempt to find a solution as soon as possible.

The Prime Minister’s Office issued a statement on behalf of the Shin Bet: “The way of action shown in the report is known to security personnel. Apart from the security checks, several other security arrangements, both visible and hidden, exist.

“The act was irresponsible and could have endangered the perpetrators of the questionable ‘journalistic mission’ and cause them severe damage.”

Wilson uploaded the gun’s blueprints online, in a format which allows anyone possessing a 3D printer, which costs about $8,000, to print the parts out of polymer and assemble a gun of their own.

Though US authorities have demanded the blueprints be removed from the internet, they have already been downloaded more than 100,000 times, which makes their distribution practically impossible to stop.