Obama to honor Michael Schwerner & Andrew Goodman both N.Y. Jewish civil rights activists, and James Chaney who were murdered for trying to register African-American voters in Mississippi in 1964 .

President Barack Obama is planning to posthumously award three Jewish civil rights workers who were murdered in Mississippi in 1964 the Presidential Medal of Freedom.

Andrew Goodman and Michael Schwerner, activists from New York, were trying to register voters in Philadelphia, Mississippi, together with James Earl Chaney, a local African-American, when they went lynched and brutally murdered by members of the KKK on the night of June 21, 1964

“These three young men, and countless others, paid the ultimate sacrifice in an effort to help bring equality to the state of Mississippi,” the office of U.S.

With the spotlight on Iranian munitions seizure and suave Israeli pilots, Friends of the Israel Defense Forces’ fundraiser in NY, brings in a hefty $20 million in donations.

The Waldorf ballroom – all three of its gilded tiers – was packed this past Tuesday night, as one of New York’s more visible and popular Jewish charities, Friends of the Israel Defense Forces, celebrated its annual gala dinner.

After the recent IDF seizure of an Iranian missile shipment bound for Gaza, the evening morale was high, and so was the socialite buzz.

A Jewish resident from Mississippi says the house in which Gen. Ulysses S. Grant, issued the expulsion of Jews during the American Civil War, should be made a museum, local media reports.

A resident of Oxford, Mississippi petitioned Lafayette County authorities on Monday to recognize a home owned by the county as an historic landmark for its significance to both Civil War and American Jewish history, and to stop plans to turn it into a jail, the Northeast Mississippi Daily Journal reported on Wednesday.

Asher Reese, a Jewish resident of Oxford, who has been researching the property found that the house was the headquarters of Major-General Ulysses S.

AIPAC’s executive director calls for pro-Israel organizations & groups to focus on passing new & stricter sanctions as a means of shaping a final anti-Nuclear deal with Iran.

When it comes to the deal between Iran and major powers, Israel and the pro-Israel community are retreating from a strategy of confrontation and working instead to influence the contours of a final agreement.

In a conference call last week, Howard Kohr, the American Israel Public Affairs Committee’s executive director, advised pro-Israel activists and leaders not to confront the Obama administration directly over the “difference of strategy” between the United States and Israel on Iran. Continue Reading »

Iraqi Jews claim materials were forcibly taken from them & should be returned to owners or descendants….not Iraq.

Jewish books and documents found by U.S. soldiers in the flooded headquarters of ousted Iraqi leader Saddam Hussein and sent to the United States for restoration have touched off a dispute between Baghdad and Iraqi Jews who fled the country.

A Passover Haggadah from Vienna, 1930 is pictured after treatment in this undated handout photo from the National Archives obtained by Reuters November 26, 2013.- Photo: Reuters

After a $3 million restoration, the collection has been put on display at the Washington-based National Archives. Continue Reading »

UN Chief: American Jews have made distinct imprint on UN

NEW YORK – UN Secretary-General Ban Ki-moon praised the American Jewish community for its partnership in fighting injustice while stressing the need to “stand strong against extremists,” while speaking in New York Tuesday night. 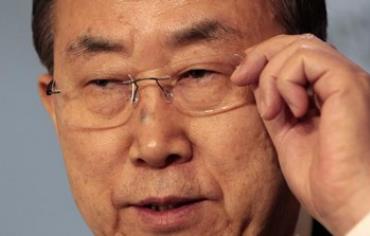 At the 50th anniversary tribute gala dinner of the Conference of Presidents of Major American Jewish Organizations, Ban said the UN and American Jewry “share a common goal… and identical values” in the pursuit of “peace and human dignity for all.”

Kerry and Indyk at the State Department in Washington. – Photo: Reuters

The meeting Thursday evening in the White House lasted 90 minutes, participants said, and was characterized mostly by Kerry’s enthusiasm for the resumed talks, and the serious commitment he said saw from Israeli Prime Minister Benjamin Netanyahu and Palestinian Authority President Mahmoud Abbas.

Kerry appeared bullish about talks he has worked assiduously to revive since becoming secretary of state in February, but also nervous about the potential for failure, warning of circumstances – for instance, pressures on Netanyahu – that could undermine the talks. Continue Reading »