Berko accompanied her plan with a detailed map, aerial photographs and groundwork. The map in question was a map of the municipal areas of Jerusalem. At the center of it was marked a new border that MK Berko had drawn, whose purpose was to remove Israel’s municipal responsibility over a long list of Palestinian neighborhoods in east Jerusalem. Continue Reading »
Category: Israel News | Tags: Anat Berko, East Jerusalem, Jerusalem
israelandstuffcom | February 16, 2016
No comments 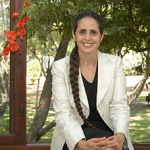 After igniting an uproar in the Knesset last week when MK Anat Berko said that there was no such thing as “Palestine” because Arabic does not have a “P” sound, the  Likud MK is sticking to her guns, saying ‘Palestinian identity was created in response to Zionism.’

In an address to the Knesset on Monday, Likud MK Anat Berko referred to the uproar she sparked last week when she said that there was no such thing as “Palestine” because Arabic does not have a “P” sound.

That comment drew harsh ridicule from a number of left-wing Arab and Jewish MKs. Continue Reading »