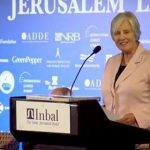 Becky Norton Dunlop  was touring the areas known biblically as Judea and Samaria when she told reporters: “Anyone who comes and visits Judea and Samaria sees that it is an inseparable part of the State of Israel.” Continue Reading »