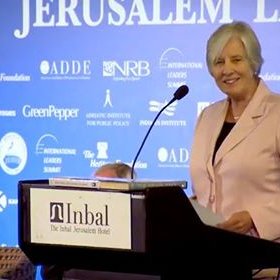 She went on to debunk the notion that Jewish settlers in the region are all hostile toward local Arabs.

“During the visit we saw that Arabs living in Israel are completely able to work together with their Israeli neighbors,” Dunlop said. “The international community has to take note of what is really happening here instead of listening to the mainstream media which doesn’t report the news but rather invented things.”

Many in Israel expect the failed “two-state solution” to finally be put to bed during Trump’s presidency. Senior members of Prime Minister Benjamin Netanyahu’s cabinet are calling for increased building in Judea and Samaria after Trump takes office.

Dunlop was joined on the tour by Republican members of the US Congress, as well as a number of European parliamentarians.