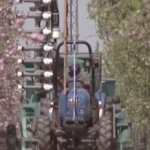 Through the blooming almond trees near the ancient site of Tel Arad in a desert plain in southern Israel, a tractor pulled a mast equipped with about a dozen small cannons that precisely shot pollen at the trees, allowing them to fertilize. Continue Reading »

Honey sales are taking their annual upward tick because of up coming Rosh Hashana, but due to the dwindling number of bees, there’s less honey to go around.

With Rosh Hashana coming up, honey sales are taking their annual upward tick. This year, though, there is less Israeli honey to go around; with sparse rainfall at the end of the winter (between February and April) and fewer wildflowers growing as a result, fewer bees were hatched this year – meaning that less honey was produced. Honey yields are down about 6% this year, with local honey production reaching just 3,000 tons this year, instead of the 3,200 tons that were produced last year. Continue Reading »