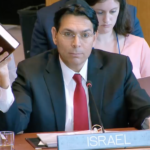 The unparalleled presentation by Ambassador Danny Danon delivered to the UN General Assembly just after Passover a few weeks ago has gone viral on social media where it has been translated into numerous languages. Continue Reading » 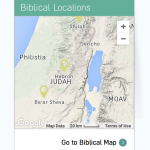 The first comprehensive digital Bible goes online after 5 years of work by a team from Herzog College, that includes commentary, articles, religious lessons, and Google Maps enabling users to “tour” the biblical locations.

“Scroll down” is taking on a new meaning: The first comprehensive Internet edition of the Bible has gone online to meet the demands of a world gone digital.

On Tuesday, Herzog College, in Gush Etzion, launched hatanakh.com — the “Google of the Bible,” as it is calling the project with the permission of Google Corporation.

Decades after the Mossad smuggled the ancient Hebrew Bibles out of Syria, Israel’s national library asks court to grant it custodianship to enshrine them as “owned by the Jewish people.”

Two decades after Israeli spies helped Syrian Jews whisk ancient Hebrew Bibles from Damascus to Jerusalem, Israel’s national library asked an Israeli court on Monday to grant it custodianship over the manuscripts — a move that could spark an ownership battle over some of the Syrian Jewish community’s most important treasures.

A library official shows a Jewish manuscript smuggled into Israel from Damascus in a Mossad operation in the early 1990s, in Jerusalem – Photo: AP

Known as the Crowns of Damascus, the nine leather-bound parchment books — some featuring microscopic calligraphy and gold-leaf illuminations — were written mostly in Spain and Italy between 700 and 1,000 years ago. Continue Reading »

Scientists in Israel say Torah believers should be thrilled by latest ‘Big Bang’ evidence that verifies the universe had a starting point.

This week’s announcement that scientists had finally confirmed the existence of gravitational waves rippling through the universe, thereby bolstering the Big Bang Theory, would presumably be a blow to those who believe in the Bible.

Not so, Professor Nathan Aviezer of Israel’s Bar Ilan University told The Times of Israel.

“Without addressing who or what caused it, the mechanics of the creation process in the Big Bang match the Genesis story perfectly,” Aviezer explained. Continue Reading »

Having been labeled anti-religious by some ultra-Orthodox leaders, Yesh Atid has since been the most dominant party getting  Israelis to study the Bible.

We have already reported several times on Benjamin Netanyahu’s revival of the Prime Minister’s Bible Study group in Israel. Now the Knesset is getting in on the trend with the establishment of its own weekly sessions of scriptural enlightenment.

The initiative came from one of the new Knesset parties, the centrist Yesh Atid, which fields both secular and religious lawmakers.

Despite running an election campaign that emphasized an end to army exemptions for and exaggerated welfare payouts to the ultra-Orthodox Jewish sector, and subsequently being labeled anti-religious by ultra-Orthodox leaders, Yesh Atid has since the election been the most outspoken party about getting more Israelis to study the Bible. Continue Reading »