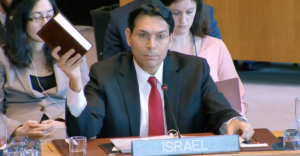 The unparalleled presentation by Ambassador Danny Danon delivered to the UN General Assembly just after Passover a few weeks ago has gone viral on social media where it has been translated into numerous languages. In the 18-minute defense of Israel’s right to the Land, Ambassador Danon covered the biblical, historical and international facts proving that the entire Land of Israel, including Judea and Samaria, belong to the Jewish people.

Quoting from God’s promise to Abraham in Genesis, Danon looked squarely into the eyes of the Palestinian delegate sitting across from him at the assembly, lifted his Bible high for all to see and said, “This is the deed to our land.” Danon then read the Bible in Hebrew, and then in English, from Genesis 17:7-8: “I will give this Land as an everlasting possession to you and your descendants after you.”

Using the Bible to defend the Jewish ownership of the Land of Israel is an extraordinary move in modern political realities. Until now, Israeli politicians have shied away from turning to Scripture in defense of Israel’s claims.

As expected, mainstream liberal media are reacting with scorn and rage, shaking their heads in disbelief that a government official, Israeli at that, would dare use the Bible in support of Israel’s right to the land. In interviews after the speech, CNN and Al-Jazeera hosts openly mocked the idea that the Bible would have anything to do with the Jewish people’s claim to a homeland in the Land of Israel.

Danon, however, remained unfazed. “The Jewish people’s ownership of Eretz Yizroel (meaning the whole land of Israel) is well documented in the Hebrew Bible and beyond (apparently a cryptic reference to the New Testament). The entire connection of the Jewish people to the Land of Israel begins right here,” he said, again holding up his Bible.

In the unprecedented speech, the Israeli ambassador went on to show that the Jewish claim to the Land of Israel is confirmed not only in the Bible and Jewish history, but in the history of the world as well. “The twelve tribes of Israel lived in this land for thousands of years,” he said. The largest tribe of Judah lived in the area now known as Judea.”

Again, staring down the Palestinian delegate, Danon declared, “You all know the names Jew and Jewish. Jew and Jewish come from Judea. It was the home of our King David and Jerusalem, the capital of Israel,” he said.

Ambassador Danon concluded by pointing out that “Jewish rights to the Land of Israel are also according to international law as decided upon in this very body (UN). A stronger and safer Israel means a stronger and safer world,” he insisted.