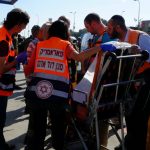 Since August 2017, the island has been battling the epidemic of the airborne pneumonic plague but cases have risen by 8% in the past week alone. Continue Reading »