Decision: Bodies of Hamas terrorists will no longer be returned to families

Israel’s decision came during Sunday’s meeting called by the government’s Security Cabinet to discuss ways to finally retrieve the missing Israeli soldiers and citizens, those dead and alive, held by Hamas since 2014.

Israel’s Security Cabinet on Sunday announced a new policy in which the bodies of Hamas terrorists will not be returned to their families, but will be buried by Israeli authorities instead.

Cabinet members passed the measure unanimously during a meeting convened to discuss possible ways to bring back the bodies of Israeli soldiers Oron Shaul and Hadar Goldin, and citizens held in the Hamas controlled Gaza Strip. Continue Reading »

Citing security concerns, Israel is still holding onto about a dozen Palestinian terrorist bodies, whereas their families claim this measure provokes anger & inflames the atmosphere even more.

Palestinian families are pressing Israel to return about a dozen terrorist bodies that Israel continues to hold since a wave of terror began about four months ago. 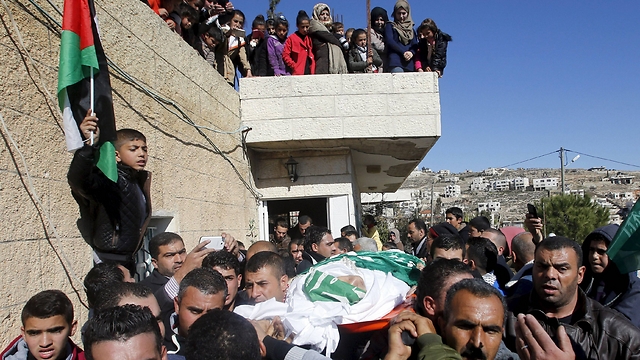 Palestinian accountant Ahmed Oweisat last saw his son Moataz in October – hours before the 16-year-old boy tried to stab an officer and was fatally shot in Jerusalem.

The son still has not been buried – one of about a dozen bodies of Palestinian terrorists that Israel continues to hold nearly four months after a wave of violence erupted in Jerusalem and spread across Israel and the West Bank. Continue Reading »

By Dalit Halevy and Tova Dvorin

Hamas leader Khaled Mashaal has introduced strict conditions for any future transaction with Israel regarding the return of the bodies of two soldiers killed in Operation Protective Edge.