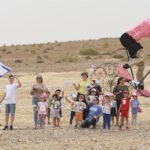 Israel kicked off the race in Jerusalem on Friday, less than a week after concluding the 2018 European Judo Championship in Tel Aviv, where Israeli judokas won one gold and three bronze medals. Continue Reading »