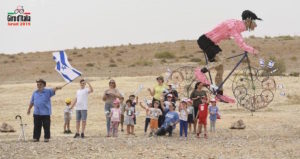 Israel kicked off the race in Jerusalem on Friday, less than a week after concluding the 2018 European Judo Championship in Tel Aviv, where Israeli judokas won one gold and three bronze medals.

These two athletic competitions are further proof Israel is able to host the biggest sporting events in the world, with no less excellence than the major athletic powerhouses worldwide, industry insiders said.

Dozens of broadcasters around the world will bring Sunday’s race through the Negev desert to hundreds of millions of viewers, possibly reaching a billion people. The Eurosport television network alone estimated its viewership at 4.8 million viewers, who likely would not have been exposed to such a positive image of Israel otherwise, giving the country a public diplomacy boost as it marks its 70th birthday.

Some towns and villages in France and Italy owe all of their tourism to media coverage during the Giro and the Tour. Israeli tourism industry insiders hope Israel will enjoy the same benefits, saying this exposure may already be felt by the local industry this year.

From helicopters broadcasting footage of the race to media crews on the ground, the Giro portrays Israel as a combination of breathtaking nature, lively beaches and high-tech centers where some of the most interesting projects in the world are being developed. While Jerusalem and Tel Aviv are used to solid public relations, Israel’s southern communities have received unprecedented public exposure thanks to the race speeding through the stunning vistas of Mitzpeh Ramon and other local tourist attractions.

The second stage of the race, which stretched from Haifa to Tel Aviv, ended Saturday night in an exciting photo finish on Tel Aviv’s Ibn Gabirol Boulevard. Tens of thousands of Tel Aviv residents applauded and waved flags as the cyclists rode by, cheering them on.

Many of those cheering on the sidelines were exposed to cycling culture for the first time, as cycling is only a budding sport in the Jewish state.

Israel’s own Cycling Academy squad was established less than four years ago. It is competing in the race after having been awarded one of the four wild-card invitations, ahead of some far more established squads.

The Giro “wild cards” are special invites for teams that do not usually race at the Grand Tour level.

The race was brought to Israel thanks to the efforts of philanthropist Sylvan Adams, the Culture and Sport Ministry and various municipalities.

Adams told Israel Hayom on Saturday that his efforts were “absolutely worth it.” He described Thursday’s prerace events as “magical.”