French MP Meyer Habib: “The Paris conference proves we have lost all shame” 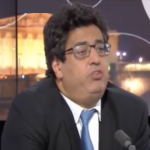 “We’re talking about a pitiful and unproductive initiative.