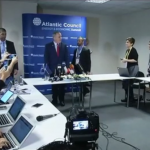 Israeli officials have met with the CEOs of gas & oil companies from around the world, including the US, Europe, China & Australia, to begin searching for further energy deposits off Israel’s Mediterranean coast.

“A year and a half ago when I entered my position, the gas was stuck, the sea was closed and the sector was strangled,” Steinitz said, at a Jerusalem press conference that morning. “We are changing this picture.” Continue Reading »

Israel took in NIS 744 million ($188 million) in royalties for offshore gas fields – a 39% increase over the year before. That, however, is a drop in the bucket compared to the NIS 3.2-3.4 billion (about $750 million) expected by 2019, the Energy and Water Ministry said Sunday.

The 2013 and 2014 royalties came mostly from the Tamar and Yam Thetis gas fields. Continue Reading »