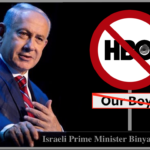 In a new HBO series focusing on the Israeli-Arab conflict, producers draw moral equivalence with the Palestinian kidnapping\murder of 3 young Jewish teenagers, then Arab celebration of the act of political terrorism, to the revenge killing of Arab youth that disgusted and angered the Jewish State.

A new HBO series titled “Our Boys” compares the kidnapping and murder of three young Jewish teenagers (Naftali Frenkel, Gilad Shaer and Eyal Yifrah) in 2014 with the murder of a Palestinian youth, Muhammad Abu Khder.

Khder was killed by a young Jewish man who pleaded guilty to taking the life of the Palestinian in an act of vengeance for what had happened to the three Israeli teens. Continue Reading »

HBO set to premiere show that led to 2014 Gaza War

The HBO miniseries follows the investigation of a brutally murdered Palestinian boy that was killed the day after the funerals of 3 Jewish teenagers that were kidnapped and later murdered by Hamas members, while hitchhiking home after school.

HBO is set to release the premiere of a series called Our Boys on August 12. The show will be a ten episode drama on the events leading up to the 2014 Gaza War, Deadline reported.

Three Israeli teenagers were kidnapped and later killed while hitchhiking to their homes in the West Bank. A day after the Jewish boys’ funerals. Continue Reading »