The text of Prime Minister of Israel,  Binyamin Netanyahu’s speech at the Holocaust Martyrs’ and Heroes’ Remembrance Day ceremony at Yad Vashem on Sunday evening:

“The last time I visited Yad Vashem was with the Prime Minister of Canada Stephen Harper, a great friend of Israel and the Jewish people. We went through the exhibition rooms which present heartbreaking documentation of the destruction of European Jewry.

“Today in my office, I met Felah, an 82-year-old Holocaust survivor. It was important to her to tell me, on this day of all days, how her memories as a child of seven who was forced to leave her two year old sister behind to die, how those memories are always with her. Continue Reading »

A group of Arabs in the coastal city of Lod chose to mock Holocaust Martyrs’ and Heroes’ Remembrance Day Sunday evening, by launching fireworks at Jewish homes just before the somber nationwide ceremonies began. However, the provocation met a determined personal response by the city’s mayor, Yair Revivo.

Revivo and Municipality Director Aharon Atias were on their way to a Remembrance Day ceremony in the Ganei Aviv neighborhood, when a volley of dozens of fireworks was fired from the area of town where the Abu Sirhan clan resides. Continue Reading »

Lawmakers from 13 countries join Israeli delegation at concentration camp in Poland which includes more than 250 people, including 60 MKs.

The largest-ever delegation of MKs, plus hundreds of Israelis and Jewish politicians from around the world are scheduled to head to Poland early Monday morning for a joint Israeli-Polish ceremony at Auschwitz-Birkenau on International Holocaust Remembrance Day.

Coalition chairman Yariv Levin (Likud Beytenu) and opposition leader Isaac Herzog (Labor) will lead the delegation, as Knesset Speaker Yuli Edelstein pulled out of the trip following the death of his wife on Friday.

“Seven decades after millions of members of our nation were cruelly murdered by the Nazis, it is my privilege and responsibility to lead the largest delegation of the Knesset, the parliament of the independent Jewish state, to the valley of death of Auschwitz-Birkenau,” Levin said Sunday. Continue Reading »

Treasury marks a victory over diminishing group of Holocaust survivors

Decade-long legal battle ends with decision to not recognize the group Tehran Children, as Holocaust survivors

The Finance Ministry’s legal department has defeated another group of Holocaust survivors. Congratulations. It’s an achievement they can hang on their walls as a badge of shame.

This week’s courtroom victory came after a legal battle lasting more than a decade by a group of Holocaust survivors known as the “Tehran children.” The group, whose number has naturally dwindled in recent years, originally consisted of some 1,200 Jewish children from Poland who went to the Soviet Union, then to Iran and finally to pre-state Israel in 1943. Continue Reading »

Israel shut a crossing with the Gaza Strip on Monday, a day after rockets that were fired from the Hamas-ruled territory forced Israelis to run for cover in the middle of a Holocaust Remembrance Day ceremony.

Israeli TV showed footage of the ceremony in southern Israel suddenly being interrupted by the sound of a Color Red alert of an incoming rocket, just as a musical performance got underway. Continue Reading »

Kantor Center Report: “EU is not doing enough to combat this phenomenon”.

A new report published Sunday, the eve of Holocaust Remembrance Day in Israel, noted a 30 percent increase in anti-Semitic violence and vandalism worldwide in 2012.

The report, by Tel Aviv University’s Kantor Center for the Study of Contemporary European Jewry, said the past year had seen “an alarming rise in the number of terrorist attacks and attempted attacks against Jewish targets, and an escalation in violent incidents against Jews worldwide.”

Binyamin Netanyahu, ‘We won’t put our fate in the hands of others’

“There will never again be another Holocaust,” Prime Minister Binyamin Netanyahu pledged on Sunday evening, in a direct challenge to Iran, during the state ceremony marking the start of Holocaust Remembrance Day. 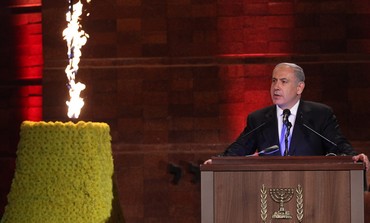 Calling the Jews a people that “seeks peace,” Netanyahu noted that “there are who seek to extinguish this light of ours.”

A Terrorist Rocket explodes in open area of Shaar Hanegev with no injuries or damage reported. ‘We’re used to disruptions,’ resident says.

Palestinians fired a rocket at the Shaar Hanegev Regional Council on Sunday – the eve of Holocaust Remembrance Day.

The rocket exploded in an open area. No injuries or damage were reported.

Benny, a resident of Shaar Hanegev, recounted, “During the Holocaust Day ceremony the siren sounded. All those in the club entered the security room and after several blasts were heard from afar, we resumed the ceremony.”

He further added, “We’re used to these disruptions. Continue Reading »