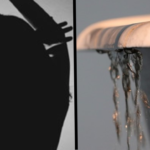 A group of Arabs in the coastal city of Lod chose to mock Holocaust Martyrs’ and Heroes’ Remembrance Day Sunday evening, by launching fireworks at Jewish homes just before the somber nationwide ceremonies began. However, the provocation met a determined personal response by the city’s mayor, Yair Revivo.

Revivo and Municipality Director Aharon Atias were on their way to a Remembrance Day ceremony in the Ganei Aviv neighborhood, when a volley of dozens of fireworks was fired from the area of town where the Abu Sirhan clan resides. Continue Reading »