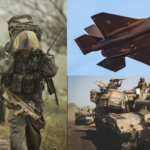 The function of the IDF’s new, highly trained multidimensional unit, comprised with tanks, UAVs & classified combat technologies, will be to operate with new advanced abilities, to track down, attack and destroy the enemy.

The IDF on Wednesday began work on its new special ops unit designed to go deep into enemy territory. The unit will be equipped with unmanned aerial vehicles (UAVs) and be joined by teams from various other commando units.

The first commando teams, alongside Air Force pilots, were mobilized to the new unit, which is still in its preliminary stages and is supposed to become operational within a year. Continue Reading »