IDF officers from the National Search & Rescue Unit of the Home Front Command plus senior doctors from the IDF Medical Corps are part of the Israeli team.

JERUSALEM — The Israel Defense Forces has sent a 148-member humanitarian delegation to the Philippines to provide search-and-rescue and medical services to areas hard hit by Typhoon Haiyan.

The team left Israel on Wednesday equipped with a field hospital as well as about 100 tons of humanitarian and medical supplies, according to the IDF.

Lifesaving cooperation occurred Tuesday between haredi IDF troops and Palestinians who were trapped in a stream growing violent due to the stormy weather. 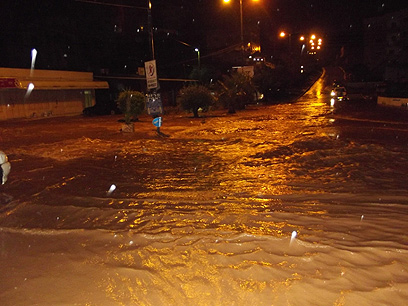 Soldiers of the IDF’s haredi battalion Netzah Yehuda managed to rescue three Palestinian men before the fierce currents washed over them. Ynet obtained a documentation of the rescue.

The IDF troops were called to an area near the Nablus River, where, they were told, cars were stranded with their drivers trapped in a constantly intensifying current. Continue Reading »