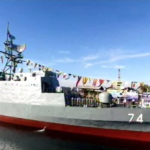 Iran’s navy on Saturday launched a domestically made destroyer, which state media said has radar-evading stealth properties, as tensions rise with arch-enemy, the United States.

In a ceremony carried live on state television, the Sahand destroyer—which can sustain voyages lasting five months without resupply—joined Iran’s regular navy at a base in Bandar Abbas on the Gulf. 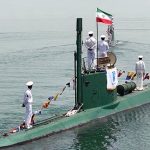 In 2014 Iranian Generals also boasted how it would send an armada of warships into the Gulf of Mexico…but they have yet to arrive.

“Our fleet of warships will be sent to the Atlantic Ocean in the near future and will visit one of the friendly states in South America and the Gulf of Mexico,” Iranian Navy Commander Rear Admiral Hossein Khanzadi was quoted by Iran’s semi-official Tasnim News Agency as saying.

Iran will likely use the warships’ visit to Latin America to advance its relationship with its ally Venezuela, a US adversary. And while Iran’s navy poses no real threat when up against the American navy, Khanzadi added that new vessels and submarines will be introduced next year to bolster the country’s fleet. Continue Reading »