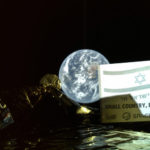 From 37,600 km (20k miles) from Earth, Beresheet’s first photograph shows the Southern Hemisphere, as Australia can clearly be seen in the background, and attached plaque in the foreground with “Am Yisrael Chai” written in Hebrew (meaning: long live the Nation of Israel).

The Israeli spacecraft Beresheet, which was launched off the coast of Cape Canaveral, Florida, two weeks ago on its way to a planned Moon landing next month, took its first selfie in space. The selfie – which was taken some 37,600 km. (20,000 miles) away from Earth – shows the Southern Hemisphere, and Australia can clearly be seen in the background. Continue Reading »

A giant step for mankind, a giant leap for the Jewish State 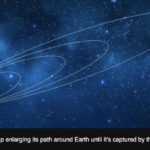 Op-Ed: When a few young men went to speak with the chairman of the Israeli Space Agency about a decade ago, it was a ‘Genesis’ of an endeavor that exemplifies Israel’s entrepreneurial ethos.

The three young men who came to my office almost a decade ago were disappointed. They have just finished enthusiastically showing me their plan to build a small spacecraft that could land on the moon, send a picture from there, and then leap about 500 meters and send another picture.

“We will do this within 3-4 years, at a cost of $10 million,” said Yariv, Kfir and Yonatan, “and we will win Google’s $20 million prize for the first private (non-governmental) group to do it. Continue Reading »

Second Israeli Astronaut Set to be Shot Into Space

Report from Jerusalem says Israeli Space Agency is coordinating with he US to have an Israeli astronaut sent to space, 1st one since Ilan Ramon’s tragic death in ’03.

On Tuesday reports surfaced indicating that Israel is intending to send another astronaut into space, the second since Ilan Ramon tragically died in the Space Shuttle Columbia accident in 2003.

Reshet Bet reported that the Israeli Space Agency is managing advanced talks with several space agencies to send another Israeli astronaut into space. The astronaut would likely go to the International Space Station (ISS) according to reports.

However, in January 2013, NASA Administrator Charles Bolden said while visiting Israel that although there was a good chance of another Israeli astronaut, he didn’t think an Israeli could be sent to ISS because the country is not a participant in the program. Continue Reading »