Throughout Morocco, prayers are recited at mosques & synagogues to remedy news of impending drought.

Prayers were recited at synagogues and mosques across the country at the request of the king upon learning that Morocco may suffer a drought this year.

At the request of the king, prayers for rain were held over the weekend at synagogues throughout Morocco.

The prayers were recited on Saturday, one day after Muslims said similar prayers in mosques at the request of King Mohammed VI, the Moroccan daily Le Matin reported. The king made the request upon learning that Morocco may suffer a drought this year. Continue Reading »

10 Jewish Yemenite children who were brought to Argentina in 2011, arrive in Israel Wednesday, to reunite with their families just as their parents land from Yemen in covert operation.

17 Yemenite Jews landed in Israel Wednesday, in a Jewish Agency operation that brought about the bonding of two families, both of which were divided in August 2011 when several of their members were brought to Argentina by Satmar Hasidim and the rest remained in Yemen. 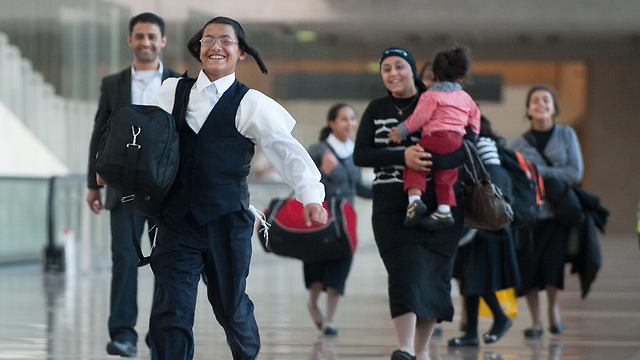 The families are to reside in one of the agency’s centers in Israel’s south until they move to permanent housing. Continue Reading »

Jews of Majorca reconnect with their roots

Centuries after his ancestors were forced to convert to Roman Catholicism, Antonio Pina could still find signs of his family’s Jewish origins in his grandmother’s kitchen.

As a child he was puzzled that she had separate plates for some foods and used chicken fat instead of pork fat when cooking meals.

Years later, as an adult, he found out why, and embarked on the long path to converting to Judaism.

Star of David at Mallorca church which used to be synagogue Photo: Gabby Newman

“I like to say that I discovered my faith through pots and pans,” the 60-year-old chef said as he stood in the kitchen of the modest synagogue in Palma on the island of Majorcawhere he prepares kosher meals for the local Jewish community. Continue Reading »

Perpetrators spray-painted swastikas and anti-Semitic images and slogans on graves, a Holocaust memorial and entrance to the Jewish cemetery

Polish police are investigating the desecration of a Jewish cemetery in northeastern Poland, the Jewish Telegraphic Agency (JTA) reported.

Perpetrators spray-painted swastikas and anti-Semitic images and slogans on graves, a Holocaust memorial and entrance to the Jewish cemetery in Wysokie Mazowieckie near Bialystok, said Monika Krawczyk, the CEO of the Foundation for the Preservation of Jewish Heritage in Poland.

One of the slogans read “Here is Poland — not Israel,” which, according to Krawczyk, is a slogan used by Polish neo-Nazi groups. Continue Reading »

Wednesday’s “Fast of Esther” is in memory of her risking her life by approaching the Persian king, her husband, to save the country’s Jews.

Wednesday’s “Fast of Esther” is in memory of her risking her life by approaching the Persian king, her husband, to save the country’s Jews.

The “Fast of Esther” begins Wednesday morning in memory of her risking her life by approaching the Persian king, her husband, in order to launch a series of events that ended with her asking him to save the Jews from the king’s wicked second-in-command, Haman.