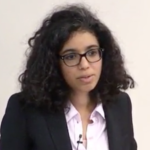 Amin is currently in Turkey, where she fled from Iran three years ago. Turkey has already announced that she will be deported in coming days from Turkey to Iran, where she is expected to be sentenced to death. Continue Reading »