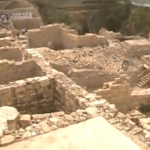 After a century of searching, archaeologists say they have found the remnants of an ancient Greek fortress once a center of power in Jerusalem and a stronghold used to fight the rebellion celebrated in the Jewish holiday Hanukkah. Continue Reading »