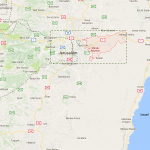 Israel police save the day by catching Palestinian terrorist on the verge of committing a potentially deadly knife-attack in Maale Adumim, just outside of Jerusalem.

An attempted terrorist attack in the city of Maale Adumim, east of Jerusalem, was thwarted Friday, it has been cleared for release this evening.

On Friday afternoon Jerusalem police received reports that a local security patrol had stopped a suspicious looking man, who appeared to be “drunk”, standing at the entrance to the city.

Police dispatched a patrol car and when officers arrived and began questioning the suspect, they noted he appeared very nervous and was answering their questions in a suspicious manner. Continue Reading »