Palestinian spokesman: With violence, we will thwart Trump’s peace initiative 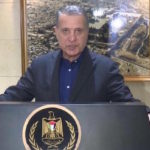 The official spokesman for the Palestinian Authority kleptocrat Mahmoud Abbas, is threatening to increase the violence against Israel if the U.S. continues their endeavors in advancing the White House’s planned peace talks.

Nabil Abu Rudeineh, the official spokesman of Palestinian Authority (PA) chairman Mahmoud Abbas, on Sunday threatened increased violence against Israel in an attempt to thwart the American plan to renew talks between Israel and the PA.

The PA’s official news agency Wafa quoted Abu Rudeineh as saying that “all the plots aimed at eliminating the Palestinian problem will collapse because of the steadfastness of the Palestinian people and its adherence to the basic principles and legitimate rights.” Continue Reading »